The Lingoport Suite is composed of Globalyzer, LRM (Resource Manager) and the Lingoport Dashboard. A number of other products are used with the Suite. You may need some of the components for a set of users and other components for Continuous Globalization.

Setting up the Lingoport Continuous Globalization System at a customer site can be done in many ways, as shown in the different deployment scenarios. The following is meant to show some of the flow and the necessary access to the system.

The green box is the Continuous Globalization System. It is a Linux (CentOS or RedHat) operating system that has the following installed:

The Globalyzer Server is either a hosted Lingoport server or another onsite server.

Furthermore, email notification emails require an SMTP account. The SMTP server access may be internal to your Company or external depending on your email services (e.g. smtp.gmail.com for Google).

The Lingoport Dashboard client runs the scripts which analyzes the projects and creates the XML files that get pushed to the server.

The Lingoport Dashboard server displays the results of the Globalyzer Scans and LRM reports in a web application.

Jenkins (not a Lingoport program)

Jenkins is used to automate running of Globalyzer Client, Resource Manager and updating of the Lingoport Dashboard. 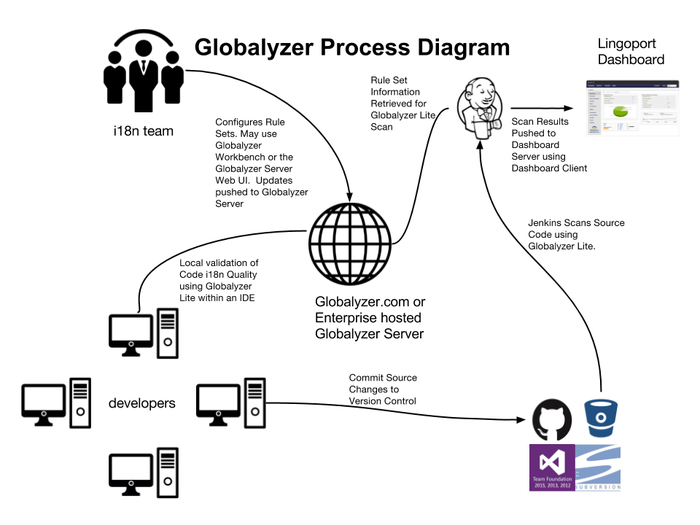 In the Additional Deployments section, we illustrate some possible deployments: