When a Lingoport project is on-boarded, the project is set up to get new code and resource files from the repository. Jenkins jobs analyze the code using Globalyzer and LRM and the results are pushed to the Lingoport Dashboard. The on-boarding process includes the following:

A project can only be on-boarded within a group. That group must have been licensed. If the Lingoport software have been installed, then there is a licensed group and there is a Jenkins job called <group name>.LicenseExpiration. When built, the output shows the details of the licenses.

In Jenkins and on the Dashboard, the Lingoport project will be referred to as <group name>.<project name>. For example given a group called "Acme" and a software project called "Weather", Jenkins and Dashboard will refer to it as Acme.Weather

To avoid an error message in the LicenseExpiration job, set up the E-mail notification in Jenkins. 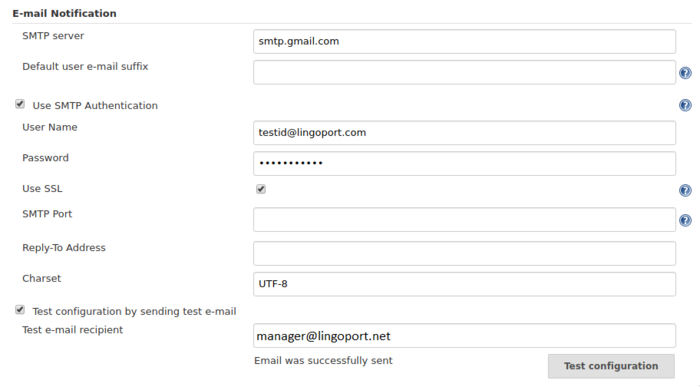 A Lingoport Group is associated with an LRM license that defines how many projects can be created in the group. When installing with the Stack Installer, the "Company Name" is the current group.

The Stack Installer creates a Jenkins job which will show information about one licensed Group and when its license expires.

In the illustration above, the group is Acme. Select the job (Acme.LicenseExpiration). Select Build Now from the left side menu to run the Jenkins job. Once it has built, select the top sphere under Build History. If the sphere is red, there is a problem with the license. This will bring you to Console Output. The console output shows when the license expires for group Acme as well as the versions of the Lingoport components and other system information.

The projects under one group can get the group's defaults for the associated translation system. So if a group's configuration is set up for an SFTP communication with a TMS for instance, all projects under that group will by default use the same mechanisms (that SFTP) with the same settings unless explicitly changed. This can be changed to a project by project basis if desired.

LRM projects are associated with a group. If LRM is installed without the Stack Installer (not recommended), the installer requires at least one group and its license. The license for a group is obtained from support@lingoport.com based on the commercial agreement between the client and Lingoport. Each project within a group must have a unique name.

To add new groups after installing the system, contact Lingoport and arrange for a new group. Lingoport will provide a license key for a given number of projects. The ManageLicenses job can also be used to update an existing or expired license. With the new license information, execute the ManageLicenses Jenkins job:

Creating a new LicenseExpiration job for a new group

In order to be notified that a group's license is about to expire, a simple Jenkins Job can be setup per licensed group. 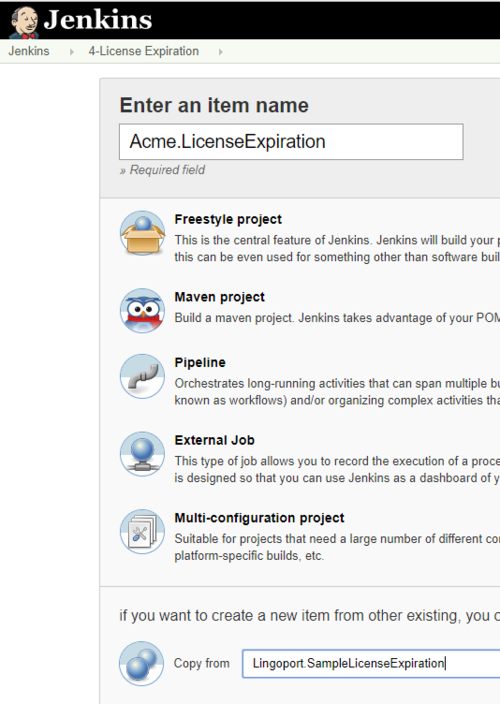 If you want to test it: 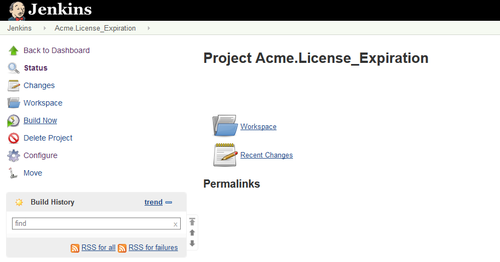 The console output of the Jenkins job shows when the LRM license will expire and when email notification will be sent.

When the Stack Installer creates the Jenkins jobs, it orders them into various tabs. Here is an example showing the <group>.<project> for Acme.Weather:

The 1 - Automation tab contains on-boarded jobs which generate the status of the project and pushes it to the dashboard, and pseudo-localizes resource files if necessary. These jobs tend to run whenever files are pushed to the repository for the project.

The 2 - Nightlies tab contains on-boarded jobs which run every day or every night and provide an update to the dashboard and an email to a set of recipients based on the configured frequency. The job name should be the same as the LRM Automation job with a -Nightly suffix.

The 3- PrepKit tab contains on-boarded jobs ending in -PrepKit which are triggered by a human intervention to send the kits for translation based on the configured translation endpoint. Prep kits can also be triggered from the Lingoport Dashboard. The job name should be the same as the LRM Automation job with a -PrepKit suffix.

The 4- License Expiration tab contains on-boarded jobs which are run every night to warn you if your license is about to expire. The job name should GroupName.LicenseExpiration.

The next step is to do the actual on boarding. Select the link below that describes your situation.